A Coup at the Zadar Market

I'm a fan of carrots. I pretty much cook with them everyday. I make cakes from them. I eat them raw. So, yesterday, we were at the market and our vegetable lady began to tell us that she's got a bag full of carrots that she can't sell - she can't sell them because they're funny looking ...they're twisted or bent - and would I like to take them. How can I say no? So, I walked away with my weight in carrots. Oh bliss!

So, I'm amending the menu. Roasted potatoes ....and carrots. And in addition to the walnut cake, carrot cake with cream cheese frosting.

We also picked up some dried figs from the walnut guy. I love those things. He had a few different kinds but we chose local ones. Around here, they dry them with bay leave which adds a little kick. Besides, it's the taste profile that we know - there's no need to be experimental at Easter time.

Off to Split to visit Husband's grandmother today.
Posted by An American in Croatia at 7:35 AM 0 comments

The Plan for Easter Lunch

We did our Easter shopping today. I'll start preparing some things tomorrow so that I'm not overwhelmed later on and besides, Friday is a fasting day which complicates preparation if you have to be tasting things all the time.

We'll go to the Easter vigil mass on Saturday night and have our usual assortment of foods blessed, such as:

a small Irish soda bread, with a deep cross cut into the top
4 or 5 colored eggs
a bottle of wine
a large hunk of cooked ham
& a small container of pickled beets

The idea here is to bless enough that you can go home and have yourself a little snack at 1 or 2 in the morning, whenever you get back from church.

This is the plan for Easter Lunch is:

Then 3 hours later, you eat the whole thing again...
Posted by An American in Croatia at 2:57 PM 0 comments 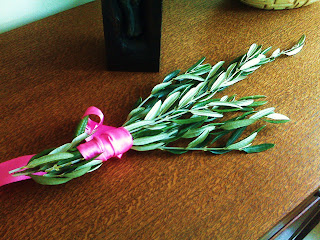 Palm Sunday marks the beginning of Holy week on the Christian calendar. Instead of traditional palm branches being distributed to parishioners on Palm Sunday, Croatians - at least in Dalmacija - get olive branches. While we do have lots of palm trees here, it doesn't even come close to the number of olive trees. So...olive branches, we get.
When you enter the church, there is a box with hundreds of these olive branches. Each parishioner is meant to take one olive branch. However, rather than one olive branch, it's a common sight to see people taking 5-6-7 branches or more...and rifling through the box to find the biggest and best branches like they're picking through potatoes.
I've lived here long enough to know the thought process:
My {husband, sister, son, daughter...etc..} doesn't go to church but because they are my kin, they are still very good Catholics. I will take branches for {so and so} and it's just as good as if they went to church.
or possibly,
I'm having the entire family over to my house for Easter next weekend and I want everyone to see how Holy I am...
Whatever the thinking, we saw old bags who looked they were hauling entire olive trees around with them!
The Pope once called Croatia the ˝Bulwark of Catholicism˝ - meaning, Croatians throughout history have lived and regularly died in defense of the faith - through invasions, conquests, etc... More recently, Croatia went from the scandal and persecution of being openly Catholic under the communists to it being a sign - perhaps THE sign - of Croatian patriotism. I say, with no doubt, that TV cameras will all point towards whomever is running for office in the local elections next
Nowadays, I often here that Croatia is culturally Catholic and people nod their head, like that actually means something. In fact, you're either Catholic or your not Catholic. You can't sit in church on Sunday morning and then take bribes on Monday and still call yourself a Catholic.
So, I see the old bags dragging their blessed olive trees and I wonder where the Bulwarks of Catholicism all went. Maybe these are the same people who's families stopped going to church the very second that the Communists came into power so that they could still get the good jobs...the big apartments that would be denied the openly faithful for their defiance of the party. Maybe now, in their twilight years, they regret their own cowardice and want God and all of us to be witnesses to the fact that they were really Catholic all along.
I don't know. I do know that, this year and from now on, we will quietly cut branches from our own olive trees.
Posted by An American in Croatia at 9:53 PM 0 comments 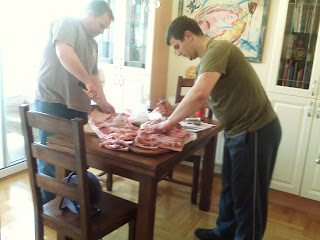 Our friend Mišel (in the foreground) came over yesterday afternoon and the guys made sausages...

We started with 12 kg of pork (carsko meso - I don't know what that means in English). After the guys cleaned the meat (pictured) - removed bones etc...we ended up with 10.5 kg of meat that was ground.

To that, we added,

It blew Mišel's mind to learn the average American cook doesn't use a kitchen scale. I explained to him that we use measuring cups....we measure volume rather than weight. To him, the difference wasn't charming...it was insane :-)

We've made sausages every year, but this year's crop was the best. After our labors, we cooked some up and ate some with sliced onions and mustard. Fantastic.

Bonus! You get a little view of our tiny dining room/office during the week. Those are kitchen cabinets that you see there. Instead of plate and dishes, I've put books in those cabinets. We've gotten many a raised eyebrows from people when they find out that 1) we put kitchen cabinets in a room that is not the kitchen, and 2) that the cabinets contain non-kitchen related items. What do I care that the cabinets were intended for some other use? It was a creative solution for a small space and it looks great.
Posted by An American in Croatia at 10:22 AM 0 comments