First off, thanks for your comment on A Story of Corruption. Your point that corruption happens in the U.S. is well taken and correct. However, I wanted to write a more substantive response to you because what you said is the most common defense that we hear and I think it's worth dealing with in detail.

Yes, corruption is a world problem and individual cases do happen in the US. However, the difference that I am highlighting here is a societal one. Corruption in Croatia is a societal ill. So much so that Croatia's own Ministry of Justice saw fit to produce this brilliant Anti-Corruption ad. It is also very likely a function of corruption that this ad aired for all of a few days before it was yanked and banished to the depths of the archive never to be seen again.

In addition to classical corruption scenarios where envelopes pass back and forth under tables, I include among the rot, the building of illegal houses and buildings as well as the pay-offs that happen to get building permits (when permits are actually sought). I include among the corrupt those people who hire complete incompetents because he/she is so-and-so's nephew. I'm talking about the workers who spend most of their time at work going for coffee and standing around but draw a full day's wage. I'm talking about the women at the open air market who charge tourists more for their products than they do locals. I'm talking about the thousands of ˝veterans˝ who never enlisted for the war (but are the right age) who scam the system to get the benefits (and there are many benefits). I'm talking about millions of dollars raised by patriotic members of the diaspora for the war effort that were shuttled directly into the pockets and personal accounts of local Croatians which to me personally is one of the most disgusting violations of trust in recent history that I've ever seen.

So, you see, I'm NOT talking about individual cases of one back scratching another. I am talking corruption as societal rot. Corruption in Croatia is absolutely pervasive and at all levels of society. The fact that it is a more accepted mode of doing business is true and not only sad but a serious impediment to development. The difference that I am highlighting is that in the US, when corruption is made public, people are actually scandalized, the public is outraged and people are forced to resign (e.g., Blagojevich) and often go to jail.

Now, there are problems in the US. No doubt. Moral relativism. Violence. etc... But corruption as a societal ill is not one of them.

If I could vote in the upcoming elections here, I would vote for USKOK (the anti-corruption wing of the Federal Prosecutor's office).
Posted by An American in Croatia at 2:41 PM 0 comments 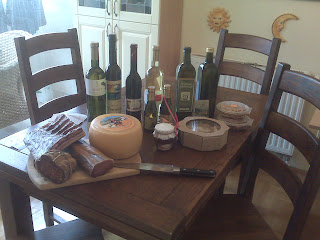 Husband and I went to Skradin on Saturday for the first-ever Agro-Tourism Fair. Overall, it was fairly lame, although there were some good booths. One of our favorites was Uljara Laća which is a new refinery for olive oil in Skradin. Good oil AND they were peddling bread bowls with little fried fishes called girice (I don't know what the translation is). Maybe they won our hearts because we were expecting to chow down at this agro-tourism fair and instead got nothin' but the bread bowl.

Neverthess, we ended up with lots of treasure at the end of time at the fair. You get a picture of our dinner room as a bonus. Husband went nuts on the meat and that's a serious wheel of cheese. The other bits are a jar of pear preserves, a cake from Imotski and various wines and liquers.

While the actual fair could have been ˝done˝ much better, I am completely charmed by Skradin. They were all pirates back in the day, you know, and consider it a feather in their cap.
Posted by An American in Croatia at 5:48 PM 0 comments