Shopping for the Baby 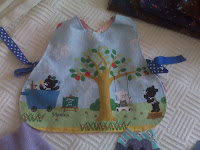 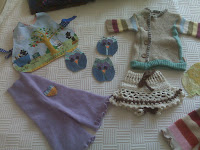 I've been picking up some baby things via Etsy. I like the idea of have one-off pieces for the baby...something that nobody else will have...things that are handmade and unique rather than exactly like a million other pieces that roll off the assembly line of some Chinese factory. I'm not knocking mass production, but I'm merely saying that it's a different mentality. To give you a corollary example, my husband and I have all original art in our apartment. And not just that...we personally know each and every artist. We know their stories. We know what they were thinking about when they made each piece of art. Sure, it's cheaper for us to go out and buy pickles....but we make them, instead. But I can tell you the names of every person who made our baby's clothes. I can tell you where they live and how many kids they have... It illustrates a qualitative difference in the way that my husband and I interact with the world. Everything is personal. It's slower. It's more time consuming but for us, it's worth it.
As far as the clothes, my choices have been met with mixed reviews, but husband and I are thrilled with what we've gotten. Natural fabrics. Lots of wool. Lots of re-purposed things (sweaters that are remade into tiny pants or the little coat that's featured in these picture). These pictures are just a few of the items that I've bought so far (I couldn't fit everything into one photo; some things haven't arrived yet). By and large, my shopping experience has been overwhelmingly positive. I've asked for slight changes on some things...I've asked for completely custom-made items. No problem. No problem. No problem. The prices have been roughly similar to those found in store-bought items but the quality is much, much better.
Sure, some things don't make sense to get from sellers on Etsy. Things like little baby t-shirts and onesies. You can pick up a pack of t-shirts very inexpensively and they're almost disposable (planned obsolesence). But even for those items, I've been making appliques that I'll use as embellishments. For example, I made the little owls picture here and will sew them onto those fairly blah clothes.
Like I said, this approach is not for everybody, but it wouldn't be the first time that I've gone against the flow.
Posted by An American in Croatia at 1:22 PM 0 comments