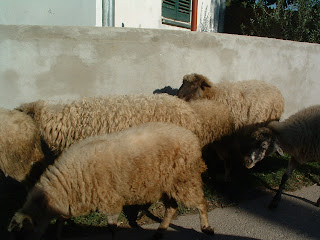 So, last night I was reading about the lambing season, this being Spring and all.

Since moving to Croatia, I've actually met a real live shepard. While it is a fairly common profession, particularly here in Dalmacija, the only shepard that I've known personally is Lukić in Ražanac (I like the tag line in this link to Ražanac ...). We had coffee and cakes at Lukić's house once. I was interested in buying some of the wool during the shearing season. The modus operandi around here is to burn the wool, because who actually wants wool in Dalmacija? At the time, I was working on a craft project that required stuffing. In lieu of wool from the Lukić flock, I used a little bit of Husband's grandmother's dowery. A dowery of wool (!)...I mean, even that there WAS a dowery blows my mind. When was the last time you heard of families getting doweries?

So anyway, husband met Lukić some years back walking around the village with his flock. Lukić told a story that the winter wind from the NorthEast, the Bura, is so strong in Ražanac that a gust knocked him off balance and he fell into the water which - naturally- got his clothes wet. Rather than catching a cold walking around in wet clothes, he walked back to the village naked. Ahhh, Ražanac...it's a unique place.
Anyway, Lukić was getting tired of the sheparding business and was thinking about going into the business of raising snails. That would be another first for me...snail wrangler.
Posted by An American in Croatia at 7:58 AM 0 comments

The practice is small. Everything in it's place, neat and orderly and clean. Very proper. There is one nurse and one doctor. She has her desk. He has a small separate office. The nurse even wears one of those little white hats that nurses in the U.S. used to wear....or I think they wore, as it would have been long before my time. ...Think 1940's nursing outfit...

At the time when I was pregnant with the first baby, Dr. K didn't own an ultrasound machine. He would schedule all of the women who needed ultrasounds for the same time and walk us all over to another clinc around the corner where he had ultrasound priviledges. Ducklings following a mother duck, all of us in various stages of pregnancy...

By the time of the second pregnancy, Dr. K had acquired an ultrasound of his own.


From the waiting room, the routine is that the nurse calls out your name - the patient's last name - signalling that the doctor is ready to see her. Except in my case - where for some inexplicable reason - the nurse insists on calling out my first name DESPITE the fact that I have a foreign first name and it would be infinitely easier for her to bark out my last name. Maybe she's trying to challenge herself (?) But everytime, it's ˝...Šimić....Longin....Šenata....Kimberly (actually, Keember(rolled r)leee).˝

It's funny. Endearing.
Posted by An American in Croatia at 5:37 PM 0 comments

Recently, I became acquainted with a charming, young artist from Salt Lake City - Senta Plyer of As I Was Saying. I was telling her that a year ago, she would have been the first person from Utah that I'd ever met - but now, since living in Zadar....Ironically, I've met several people from Utah.

A few weeks before Easter last year, we met two Mormon boys standing on the street corner trying to talk to people on a Saturday night. One of them started talking to us, in PERFECT Croatian, asking ˝if we wanted to be a part of a church that isn’t corrupt.˝

Now, you must know that Husband and I met at church...Catholic church...and the faith is central to our life together. So, this approach of theirs piqued our interest not because we were conversion material but rather, we wondered how successful their tactics were in Croatia as it is purportedly a Catholic country.

So, ˝they˝ continued talking in perfect Croatian - I say ˝they˝ because the younger one never spoke. When Husband said ˝you can speak English,˝ these guys melted into a gooey puddle. As an immigrant, myself, I know how they felt. Your ear strains to hear something familiar all the time.

Turns out that the young one, Brady, had been in Croatia all of a week or two and was in complete shock. The older one, Chase, was almost done with his time in Croatia. We chatted for an hour mostly off the topic of religion, exchanged contact information and parted ways.

As the time approached, we thought to invite those boys for Easter lunch but wondered if they would even be allowed to come. I called anyway. ˝oh my gosh, oh my gosh, I knew you guys would call us...I knew it!˝ So, yes. They could and would come. A third Mormon kid, Jerrod, was absorbed into the fold after being evacuated from Serbia a few days prior.

So our Catholic household for Easter 2008 consisted of:

Husband and I, Husband's 75 year old Yugo-nostalgic aunt and 3 Mormon boys. What a mix to celebrate the birth of our Lord!

We ended up having those boys over to our house lots of times, including American Independance Day. As is standard operating procedure, those boys get moved around to other cities...some go home...so the exact composition of our group of Mormons changed everytime. We went through Miles from Texas...Robbie from Arizona...Gabriel from Italy...Hugo, a Venezuelian Mormon whose whole family moved to Zagreb (so he spoke Spanish and Croatian) but it wasn't until we lost Brady to Varaždin in the north that we parted ways with the Mormons. It just wasn't the same after he left - the last vestages of the core group were gone.

They were good boys, though. Good times.
Posted by An American in Croatia at 8:00 AM 0 comments 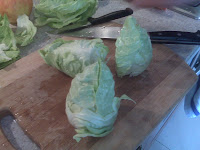 This vegetable is called Bull's Heart. I have no idea what it is but I like it. It's sort of a cross between cabbage and butter lettuce. Add a little carrots, onions, garlic, some bacon and balsamic vinegar...Di.Vine. The bacon is a big fat cheat....it makes everything taste good.