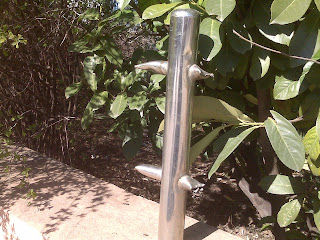 So we're walking to the police station to update Husband's ID card. About a block away from the police station, we notice that all of the spindles from this guy's stainless steel perimeter fencing have been cut.

We asked a friend of ours who knows this guy, what happened? Aparently, during the night - someone came and cut all of the spindles and stole them. The fence had been there a week or two.

I guess that whoever stole them felt that they deserved the pieces more than the ONE WHO PAID FOR THEM!

Neighbor A can afford a stainless steel fence;

I can't afford/don't want to pay for a stainless steel fence;

Since neighbor A bought a stainless steel fence once and if I take some of the pieces....he probably has enough money to replace them

On the issue of crime in Croatia...I would say that it is relatively low. I had a much higher chance of being wacked on the head by a lead pipe while we lived in Washington DC than I do here - where it is almost nil.

When crime happens in Croatia - it's almost always of the white collar variety (read: ripping people off for 1 kuna or 1 million kuna). The logic: You have a lot....and I have little (but somehow manage to have properties all over the county), therefore, you should give me what you have.

I'll give you another recent example.

In February, Croatia hosted the World European Handball Championship and Zadar was among the list of cities which held the games. While one would think that this would be a big deal for a small town....thousands of foreigners descending in the off-season...in fact, most restaurants remained closed (because it's the off season, silly). So, thousands of tourists were roaming around...had nowhere to go....nothing to see. That's the backdrop.

A little restaurant/bar that we frequent discussed their plans with us for capitalizing on the event. The Plan: Charge the tourists 10 euros for what costs the locals half. The rationale that they gave us....˝well, Germans are used to spending that on lunch...˝

Posted by An American in Croatia at 8:09 AM 0 comments

I am asked 70 times a day ˝how do you like living in Croatia˝ and you bet your ass, the answer is ALWAYS an emphatic ˝it's super to live here.˝ Anything less enthusiastic would be taken as an insult and frankly, people don't really care about my true answer, anyway. Just like people don't really want to know your life story when they ask, ˝how are you today?˝

Nevertheless, I am asked this question all the time - no matter how inappropriate the timing...like when I'm at the hospital and bleeding... ˝....uh, yeah...Croatia's great...just great˝ as paint is chipping off the walls and the nurse is trying to insert an IV while WEARING NO GLOVES and I've just seen her work on two other people in the room in the same way...

I definately went through a period where it wasn't a total lie .... and everything WAS super, to me. But that time is behind me. Now, I see everything - warts and all - and the place is slightly less charming to me than it was initially but ....BUT ...I still miss it when I go away.

But the truth is, I have a love-hate relationship with Croatia-as do most people who actually live here. My husband, a Croatian, calls it death by a thousand papercuts. Basically what he means is that there is so much absurdity that you either grow a sense of humor or you go nuts.

Like everyplace, Croatia has good aspects and bad aspects. From my perspective,

the good aspects are...

You see my point.

In the end, it doesn't matter what I think...I'll be buried here.

How's that for Slavic thinking!
Posted by An American in Croatia at 10:18 AM 0 comments

So, the crack engineers at the city are repairing the sidewalks in preparation for the season (why else would they repair anything in this town but for the tourists). It took 4 grown men a full workday to patch a 1-square meter crack in the sidewalk. Instead of erecting normal barriers to prevent idiots from stepping all over the wet cement, they have arrived at a different creative solution which is to suspend a piece of old wood, balanced on two stones at each end - like a balance beam that's 4 inches off the ground. Of course, this acts like a magnet for the Zadar youth who waste no time to dance in, write their names on & carve inappropriate pictures into the wet cement for all to see for eternity.
Posted by An American in Croatia at 8:10 AM 0 comments

It's on days like today that I love living in Dalmacija. Pefect human temperature and sunny skies. Frankly, I could do without the urban peasants caterwauling outside, but one can't have everything in life. And since today is a weekday, the cafes will all be full of hard-working Zadrani. At moments like that, it's hard not to remember the Jutarnnji List article which cited a study whose punchline was that the average Croatian works all of 3.8 hours per day (if you are able to read Croatian, see http://www.jutarnji.hr/vijesti/clanak/art-2009,2,20,,153080.jl). And I believe it. And before you attribute my observation to my own North American puritanism, I'll note that even the Argentinian transplant who works at Rustica mentioned in conversation that she's noticed that Croatians don't really like to work too much. Baš tako.
Posted by An American in Croatia at 11:21 AM 0 comments