Of course I appreciated the fact that it was anxiety provoking to be asked to sing a piece of music that you haven't heard 1,000,000 times. OK, so you didn't know the melody that well. I didn't either. That's why the nun gave us sheet music.

I say this lovingly because it might be considered bad form, given that we are The Church Choir, to simply refuse to lend your voice (leaving the Amerikanka in an unplanned solo) during Mass.

I could be wrong.

PS: But thank you for chiming in half way through the first verse. (I'm sure the congregation didn't suspect a thing...)
Posted by An American in Croatia at 10:42 AM 0 comments

You complain more than any group of people I have ever seen in my life. And that's hardly an exaggeration. In fact, I don't think I've seen such consistent group protest since my 6th grade gym teacher told us we'd start every class by running laps. We spend two nights a week in practice, 70% of that time spent whining about practice. Well, I don't know how to say this but...um...we need to practice. Have you heard how we sound? Sure, God loves a voice lifted in song for His sake, but your near-absence of effort and constant objections make baby Jesus cry.

Do any of you remember the last time that you did something inspired? ...ok, perhaps that's over the top...after all, what other opportunity is there to be recognized as the exemplary Catholics that you are from amongst your church commmunity. But I've got to tell you, friends, nobody is watching because they are the headlining stars of their own Catholic show. Don't you know that?

In the end, you thought that you found your meal ticket in the mala amerikanka...you know, someone whom you could take under your wing and use, but the result is less than that and I know that it's frustrating and prompts dreams of secret sabbotage. But have faith. I'll keep going to practice....working my way through the songs. And you should, too. Just quit acting like dinosaurs. We still have a chance to make a silk purse from a sow's ear if you'd start putting as much passion into the music as you do into complaining.

Kimberly
Posted by An American in Croatia at 8:51 AM 0 comments

After months of painstaking document collection...letters from here and there...documents from America with embossed seals and official stamps...even getting fingerprinted...twice...waiting for the "No Record" stamp from the FBI...etc...

I was summoned yesterday to pick-up the 2.5 X 3" sticker with the big purple stamp and the illegible signature which was immediately slapped onto Page 14 of my passport.
Posted by An American in Croatia at 8:55 AM 0 comments 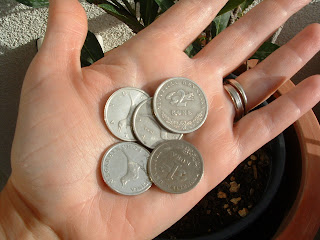 On the way to the Tisak, this morning, I was thinking about money. The coins pictured here in my hand bought me one newspaper. 6 kuna.
It goes without saying that everyone loves inspecting foreign money. In large part, the novelty holds our attention, but there's an important cultural element. What a people decide to print on its money says a lot. For example, I remember spending few minutes looking intently at some Canadian money...a bill, whose denomination I don't remember...but what I DO remember is that it read, "Women are persons." Oh my goodness....My husband and I had a good laugh about that one. He, a Croatian-Canadian, never really spent much time studying the money but it was entirely new to me, an American, so I looked at it with fresh eyes.
There are British Pounds with pictures of the Queen...American Dollars with pictures of the early presidents and thought leaders...Croatian Kuna feature images of their national patriarchs.
There used to be the Italian Lire, French Francs and Dutch Kruners....and so on....with pictures of their revolutions, revolutionaries and heros...or in the case of the Dutch Kroner, their sunflowers....but all of it, money with character and a national identity that speaks volumes about its people and history. Well, Europe has replaced it all with The Euro...and to that, I say...too bad.
Likewise, the modern Croatian Kuna...with just over a decade under its belt....will be a thing for the history books within the next few years with "ascension" into the EU.
Aw well....I'll save one of everything for the kids and grandkids.
Posted by An American in Croatia at 8:52 AM 0 comments