Croatian as a Second Language 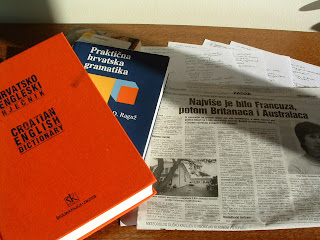 Professor Marko Longin once said that the richness of a language can measured by the breadth of its curse words. Croatian has a veritable tome of curses...none of which I will canvas here....but I'll say that they can be quite colorful. Nevertheless, I can attest to the fact that the Croatian language is deep. Very deep. For example, Croatians don't simply cut something, if they're cutting something like a tree, the verb, sjeći, is best...if they're talking about hair, then it's šišati...but wait!....perhaps it's a length of cloth that they're cutting, then rezati is most appropriate. Cut, cut, and cut. You can imagine the difficulty for foreigners.
There are problems with pronunciation. Lj, for example. Two distinct letters in English, one in Croatian. To blunder the pronunciation of this letter means that instead of people (ljudi), you end up demented (ludi). However, far and away, the biggest hurdle is the grammar....case endings, in particular. English has none, Croatian has seven. All of them completely logical to the native speaker and completely lud to everyone else. And as it is still relatively rare for someone outside the bloodline to learn Croatian, the average Croatian ear is not attuned to extrapolate what someone like me is probably saying, particularly here in Dalmatia. Thus, I have been on the business-end of a great many blank stares after performing, what seemed to me to be, oratory fireworks. Fortunately, I get fewer and fewer blank stares; more and more looks of shock and awe...as if the family dog suddenly stood up and recited The Raven. Frankly, I prefer that but look forward to just conversing like an average person.
Posted by An American in Croatia at 9:17 AM